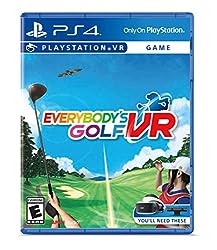 78%
Other PS4 game
Popularity 0-100 scale indicating how frequently people buy the product online. Recalculated daily.
35 / 100
Rank: #267 out of 377.
#1 is Minecraft
Details
Info
Color Mouse over a color for a picture
Original Version
Weight

Everybody's Golf VR is a well-known and one of the cheaper options. It's in the top 3 bestselling PS4 games and has dozens of popular alternatives in the same price range, such as Everybody's Golf or Yakuza 0 .

Everybody's Golf VR was released last year in May. There are a lot of newer PS4 games on the market. Show newer PS4 Games